Barry Napier is an amazing writer who gets far less attention than he deserves. Barry has had more than 40 short stories and poems featured in print and online publications. He is the winner of a “Write a Dead Man novel” contest, and the resulting book, Streets of Blood is out today with Amazon.com’s 47North imprint.

I hunted him down and asked him a few questions.

1. Streets of Blood, Dead Man #18 is out today. You won a contest to write the book. Tell me a little bit about that.

I saw the banner for the contest on Kindle Boards last year for the “Write a Dead Man Book” contest. I had read the first two books and thoroughly enjoyed the first one. I loved the idea of a horror story told in serial form. And the set-up for it was very much like the old Kung-Fu television show where the main character is drifting from town to town to stop corruption and evil. So I wrote up a chapter that I thought would be unique and stand out from the other entries. It was a nearly poetic opening chapter that quickly escalates into a maddening situation.

That sample chapter won me the contest and I spent three and  half months writing and editing the book. Working final edits with Lee Goldberg and William Rabkin was like some great unexpected writing workshop. And in the end the things I learned from the experience made me a much better writer.

The book is currently available and is filled with horror, a few twists and turns, dark humor, and the unpredictability of the Dead Man series.

2. Let’s talk books. What are you reading now, and what are your all-time favorite books?

Right now I am reading Abandon by Blake Crouch. He’s quickly becoming my favorite indie author. Favorite book of all time is a tricky question. A few would be Hemingway’s The Old Man and the Sea, Vonnegut’s Slaughterhouse Five, King’s The Shining and Danielewski’s House of Leaves.

3. Do you read a lot of horror?  Who are your favorite horror writers? Why do you think horror is so popular at the movies and less so at the bookstore?

Yes, horror makes up about 80% of my reading time. King is still King of the Mountain (pun only slightly intended) as far as I’m concerned, but Clive Barker’s work (pre-Abarat) left a lasting impression on me and really can be accredited to making me want to become a writer. I’m also a big Lovecraft geek and go back to At the Mountains of Madness whenever I want to be awed by a book.

My own thoughts about your movies vs. bookstore question are muddy. I actually am pretty depressed about the current state of horror movies. I think the psychological dramas can be a bit more horrifying than “horror” these days. Not to insult any devout moviegoers, but I think horror is doing so well in the movies because people know what to expect in horror now: a remake to something they’ve already seen, a found footage film, Saw 35, and so on. It’s become formulaic and predictable. And when it comes to mainstream moviegoers, they tend to stick with what they know.

Horror books on the other hand…I don’t know what has happened. There’s some great horror fiction out there, but I think some authors are taking a different approach in how it is written so it is confusing some readers. For instance, Cronin’s The Passage is, in my estimation, a solid horror novel. But because it was so popular, it was being sold in Target next to Nicholas Sparks and Stephanie Meyer. And I think the publisher knew this would happen, so it wasn’t billed as the horror novel that it is. On the other hand, you have books like Mark Danielewski’s House of Leaves which is, in my opinion, one of the best horror novels ever written. But it’s one of those books that was overshadowed because of its complex structure and different approach to the genre.

I actually agree with King. I have no problem admitting that some of the best books I have read this year are the Young Reader books my 6 year old daughter is obsessed with right now. I’m taking away awesome lessons about dialogue and character development from those books, believe it or not (Sarah Pennypacker’s Clementine series is exceptional).

On the other hand, I am also one of those readers that will usually stick with a book until the end, no matter how much it stinks. I like to figure out how and why thing’s don’t work before I make those same mistakes. I also think my love for poetry comes from the fact that I literally did read damn near anything when I was in college.

Shaky ground here, but… 90% of the self-publishing success stories are from one of the following groups:

A) Someone who was traditionally published before and brought a fragment of their existing audience with them.
B) People that can afford to sink a nice chunk of money into promotions like BookBub or paid reviews at Pixel of Ink.
C) Lucky folks (as J.A Konrath and Hugh Howey will both gladly tell you)

As for me personally, I am not in either of those 3 categories. I was laid off about 8 months ago and am fighting to help contribute to my family’s income. So luxuries like paid reviews and $500 promo deals at other websites aren’t even an option for me. I am simply hoping the luck thing will kick in after I get a few more titles out.

I will say that that I love the control self-publishing grants writers. At the end of the day, I think the ability to create your own brand and platform is worth the risk.

6.Your Everything Theory books deal with conspiracy theories. What are are favorite ones, and are there any you secretly want to be true?

Ha… I think there are conspiracies behind a lot of things that raise the hackles of most people. The Roswell conspiracy is an easy answer (mainly because the government changed their story about a trillion times) and I openly admit that the Pentagon explosion on 9/11 has too many factors behind it to have been coincidence. But in terms of spooky conspiracies in regards to Everything Theory, I’ve always been fascinated with the Philadelphia Experiment. If you’re familiar with it, do some research and have your mind blown.

Absolutely. And I even think we will have this fact proven within my lifetime. Of course, to think this life would be similar to ours is laughable. I agree with Michio Kaku’s theory… life on other planets will come in 3 basic forms, one of which will be of a degree that goes beyond flesh and bone and into something wholly different… a civilization that can travel via pure thought. And even if we find world’s with life extremely like our own, they may be hundreds of thousands of years ahead of us technologically. I believe any confirmation we get about life on other planets will probably be due to the abilities of the other world’s technology and not solely our own.

8. What one thing do you know about self-publishing now that you wish you knew  back when you started? 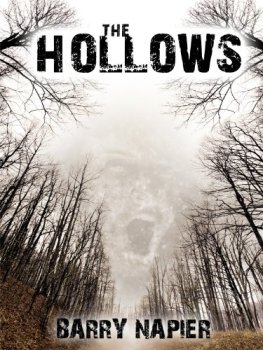 That it was going to quickly become a very credible form of publishing. When I started, those dirty stigmas were still associated with it. And as I was trying to become an author that people took seriously, I was very frightened to even try it. I look back to some authors that jumped on board when self-publishing was taking off, see how well they are doing now, and deeply regret my reservations.

If you want a taste of Barry’s writing, The Hollows is free for a while to celebrate the publication of Dead Man Streets of Blood.

Follow On Books and Writing on WordPress.com
Whitesands Publication DateSeptember 26, 2021
62 days to go.