I’m currently reading three books (I tend to read more than one, it’s a filthy habit, I know) and one of them is The Grapes of Wrath.

I think it may be unfair to the other two, since the writing is so sublime and the political commentary and the characters are timeless and near perfect. This truly is one of the finest books I have read, and I haven’t even finished.

It splits between the story of the Joad family and descriptions of how American society is changing as a result of the Great Depression. I’ve heard from readers who skip the descriptions and just read the story but I think they are losing out. Take the following passage for example, where Steinbeck talks about the farms in California, and how the society of the West became capitalist. This passage is the finest writing I read all week. 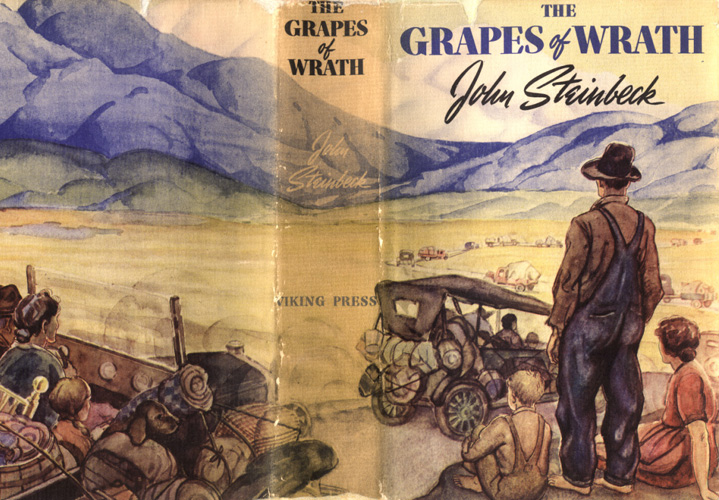 “Then crop failure, drought, and flood were no longer little deaths within life, but simple losses of money. And all their love was thinned with money, and all their fierceness dribbled away in interest until they were no longer farmers at all, but little shopkeepers of crops, little manufacturers who must sell before they can make. Then those farmers who were not good shopkeepers lost their land to the good shopkeepers. No matter how clever, how loving a man might be with earth and growing things, he could not survive if he were not also a good shopkeeper. And as time went on, the business men had the farms, and the farms grew larger, but there were fewer of them.
Now farming became industry, and the owners followed Rome, although they did not know it. They imported slaves, although they did not call them slaves: Chinese, Japanese, Mexicans, Filipinos. They live on rice and beans, the business men said. They don’t need much, they wouldn’t know what to do with good wages. Why, look how they live. Why, look what they eat. And if they get funny – deport them.”

If you do not own it, I strongly suggest you buy The Grapes of Wrath.

But don’t take my word for it, let this one-star review of the book really drive the point home:

The book had very little plot. Yes it was descriptive,but I didn’t learn anything new in the book. It went on and on and on. The intercalary chapters were the worst part of the book. They told me nothing. At times it put me to sleep. I feel it has made me dumber for having read it.

This is the exact opposite of my view of what is a great example of a five-star book.

When preparing to write the novel, Steinbeck wrote: “I want to put a tag of shame on the greedy bastards who are responsible for this [the Great Depression and its effects].” (From Wikipedia)

Now… please tell me what the best thing you read recently is, and what you think of the Grapes of Wrath.