“It is said that in Ulthar, which lies beyond the river Skai, no man may kill a cat; and this I can verily believe as I gaze upon him who sitteth purring before the fire. For the cat is cryptic, and close to strange things which men cannot see.”

So starts H.P. Lovecraft’s The Cat’s of Ulthar, one of many stories from which Kij Johnson gets her inspiration for her novella The Dream-Quest of Vellitt Boe. 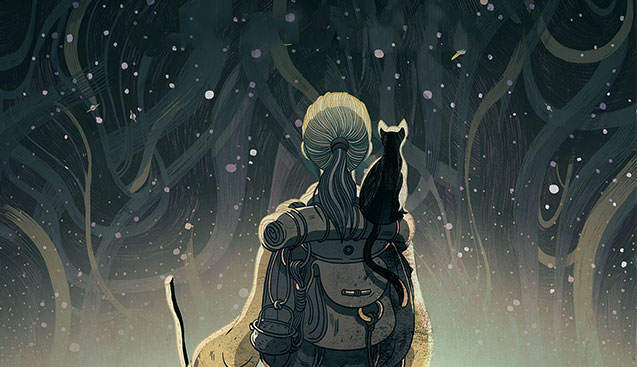 The Dream-Quest of Vellitt Boe is told in Lovecraft’s world, though a world where the cosmic horror is not mysterious and threatening but familiar and, erm, threatening. The dream-world is place of vindictive and mercurial gods. Distance is not to be trusted; the same trip might take two days one time and three weeks another.

Fickle gods may destroy anything at anytime. And yet, the world goes on.

Vellitt Boe is a professor in an all-girl’s university in Ulthar and one of the girls has snuck away with a boy from the waking world. Only, she is the granddaughter of a sleeping god who, if waking and finding his granddaughter gone, might just destroy Ulthar.

So Vellitt Boe goes after her. It is a perilous journey told in Kij Johnson’s fantastic prose. (If you don’t own her collection At the Mouth of the River of Bees you should remedy that right quick).

The story is a gift to those of us who have a thing for Lovecraft, and also for those who like a tale whose quality lies in the telling. This is fantasy at it’s best.

Despite the connection to old Lovecraft, this is not a horror story by any means. Johnson uses the fantastic elements from his dream tales and weaves from them a story very much her own.

Fans of her Hugo and Nebula award-winning The Man Who Bridge the Mist are in for a treat.