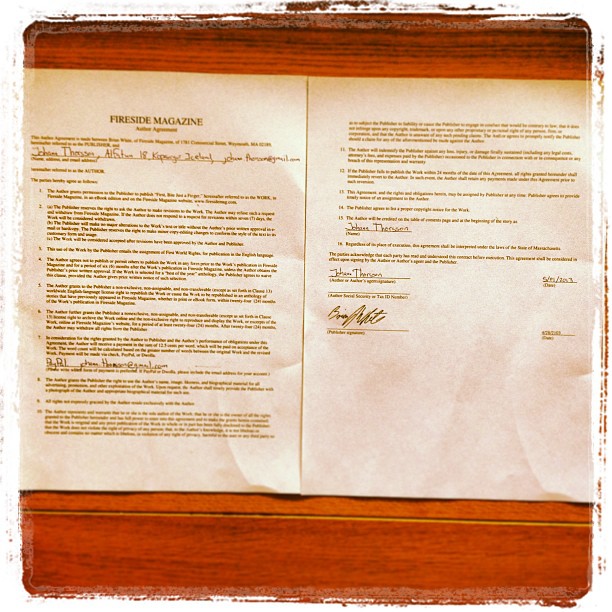 So… I made the first professional short story sale of my career last month, to Fireside Magazine. 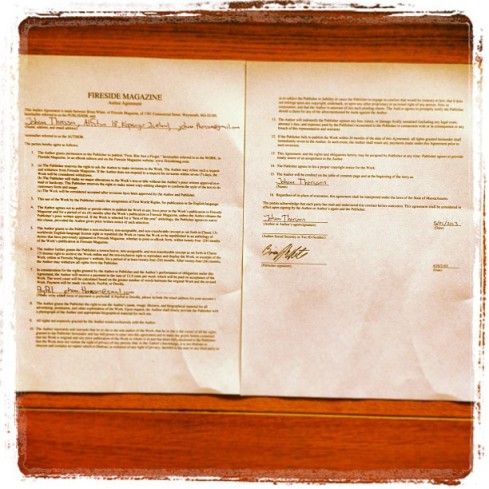 This is the contract, all Instagrammed to bits so you can’t really see all the words. It’s the first time I’ve had to sign a contract for anything I’ve written, and it made me feel… official. For all other sales it’s just been a trust thing, no contracts or anything, even when I’ve been paid well (you can still make a little cash selling stories to magazines here in Iceland).

Fireside put out three issues last year, each funded with it’s own Kickstarter. Writers who had stories in those issues include Chuck Wendig, Kat Howard and Ken Liu. I wish I could claim that I was now on par with these people (Ken Liu won the Hugo, Nebula AND The World Fantasy Award for his excellent The Paper Menagerie) but I am maybe nipping at their heels.

The story in question is short, just under 1,000 words (flash fiction), and is dark and disturbing. It comes hot on the heels of three rejections for another story so it did wonders for my confidence. It’s one of those odd cases where you write a story in a single evening, let it rest and then fix it a little bit, send it out and get accepted right away. This is the luck part people talk so much about. They got around 600 flash-fiction stories submitted and are publishing 24 (two in each issue). So 24/600 = 4% acceptance rate.

I have no idea when it will be out in the world, but the first issue of the new Fireside is slated for July. In their own words:

Each issue in Year Two will have two pieces of flash fiction (1,000 words or less), one short story, and one of 12 episodes of a serial fiction experiment by Chuck Wendig. Each issue will also have artwork by Galen Dara. We plan to begin the publishing the monthly magazine on July 1.

In the meantime, check out their previous issues (clicking an image takes you to their amazon page): 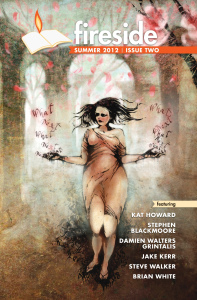 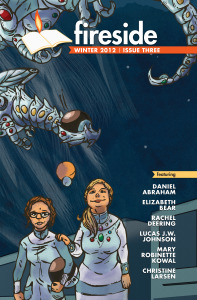 You can also read some of the stories free on the Fireside website.

8 thoughts on “The Filthy Pro”