I am a massive fan of the graphic novel. Comics, not so much.

What I mean is that I am more a fan of complex stories in graphic form than superheroes in tight spandex, fighting aliens, robots or robot aliens. My favorites are Watchmen, Neil Gaiman’s Sandman series and Strangehaven.

I recently started reading two new series; Locke & Key and KULT. I finally got to Locke and Key after hearing a great many good things by people who’s opinion I value. I have a shiny gadget called an iPad, and after installing a comic-buying app (great idea) Locke & Key was the second comic I bought (the first being KULT). I like collections as much as I dislike single issues of comics. Collections mean that I can read a complete book, instead of flimsy and infuriating half-stories. I don’t go in for collecting rare issues of comics or any nonsense of that sort. Give me complete stories. Anyway, where was I? Yes… Locke & Key.

Locke and Key tells the story of a family that moves back to a large gothic house (hint #1) in a town called Lovecraft (hint #2) after the father is gunned down by a student. The story smells slightly of Mr. Hill’s very famous father, but is original, entertaining, full of suspense and beautifully made into art by Gabriel Rodriguez. I just completed the collected first series and look forward to reading the rest. 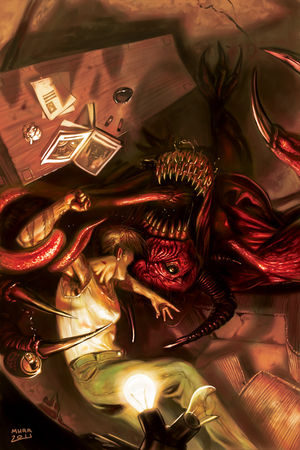 KULT is probably something you are hearing for the first time. Originally a horror role-playing game, it has now spawned a comic. This I also bought with my magic internet-powered comic-purchasing app on the iPad. I really liked the world of KULT, a truly horrifying world richly detailed and disturbing. Wikipedia says: “Kult is notable for its philosophical and religious depth as well as for its mature content.” You could safely call it the horror version of The Matrix, as we are living in a prison, unable to see the true reality. The setting was great. The actual gameplay was not. I have often entertained the idea of writing a story set in the world of KULT, and was surprised to see that someone had already done so, in comic form.

The comic was very well drawn, but so far (after two issues) the story hasn’t grabbed me. It is rushed, and missing the paranoia and claustrophobia from the source material. I bought the first two issues and am sadly in no hurry to buy the rest. And I SOOOOOO wanted to like them.

Take-away lesson from this post: read Watchmen and Sandman. They are truly the top of the graphic-novel heap, and must-haves for any library. Locke & Key is very good, and I look forward to reading more.