In the recent weeks I completed three very different but very good books.

These are a collection of stories with magic and monsters in them, a rather well-written zombie novel, and a book by my favorite newly-discovered author. Come on in, take a seat and have something to drink by the fire while I tell you more.

Click the book covers to go over to their amazon.com page, since you’ll be wanting to buy at least one of them after reading this.

Pretty Monsters is a collection of long short stories (or novellas). I picked it up on sale at my local indie store and while I was teetering on the very edge of making a decision whether to buy or not, I saw magic words on the inside that made my decision for me: “Drawings by Shaun Tan.” It is no secret that I am an admirer of Shaun Tan. But his drawings in the book are just little teasers at the start of the stories, this is all Kelly Link’s show. And a good show it is.

Pretty Monsters contains ten stories of magical fantasy, with some sci-fi thrown in for good measure. My favorite story is The Wizards of Perfil. The following passage from The Wizards of Perfil is a great example of the worlds Kelly Link creates for each of her stories:

Everyone knows that there are wizard bones under the marsh mud and that the fish and the birds that live in the marsh are strange creatures. They have got magic in them. Children dare each other to go into the marsh and catch fish. Sometimes when a brave child catches a fish in the murky, muddy marsh pools, the fish will call the child by name and beg to be released. And if you don’t let that fish go, it will tell you, gasping for air, when and how you will die. And if you cook the fish and eat it, you will have wizard dreams. But if you let your fish go, it will tell you a secret.

The stories are all wonderful little gems and the main fault I have with Pretty Monsters is that Kelly Link includes so much detail for each world and character in her stories that it takes her a while to get to, well, the story itself. She sets up a wonderful stage and fills it with interesting and funny and quirky characters that then sometimes don’t do very much. I feel The stories are all really clever, as the passage above should show, and I read the stories and enjoyed them all. Very highly recommended for fans of fantasy fiction, four stars.

Zombie books rock. New York City rocks. So how about a zombie novel set in New York in the aftermath of the zombie apocalypse? It can’t possibly go wrong (though it very nearly does).

Mark Spitz is the book’s protagonist, and is a self-proclaimed average guy, a coaster in the life before the world ends. And this is one of the two problems Zone One has for me. Mark (who was rather annoyingly referred to as the full “Mark Spitz” throughout the entire novel, never just “Mark”) is so average that we just want to prod him with a stick to make him at least try a little harder. The second problem were the long passage of introspection during almost every scene. Mark walks into an office building in New York and zombies attack him. Now, instead of Colson describing the action, he has Mark start thinking about who the zombies remind him of. For a few pages.

Very little happens in the book itself, until the very last pages. Mark spends his days with a team of survivors who have been given the task of clearing up stragglers, zombies that don’t attack but just stay still. They shoot them, throw them out into the street and carry on to the next building, all while reminiscing about this and that. Colson’s writing is the books saving grace, and for fans of zombie fiction who have longed for “deeper” zombie books Zone One is THE book to read.

I hope there is a sequel, since things are very, very interesting in the last pages. Four stars, despite the introspection. 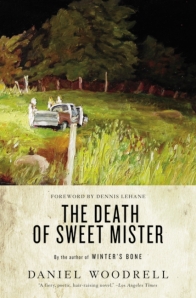 I have a serious fondness for Mr. Woodrell’s books. Since I read Winter’s Bone (one of the very finest books I’ve read in a long while) I have been on a Woodrell binge, and The Death of Sweet Mister is the latest one I read. It takes place in the Ozark’s, a poor section of the United States, mostly in Missouri, and as is the case of many of Woodrell’s books, it centers around the lives of some unfortunate souls.

In The Death of Sweet Mister we follow Shug Akins, an overweight teenage boy who spends his days in the company of his mother who drinks too much and wears too little. Red, possibly Shug’s father, plays a large role in Shug’s life, though mostly detrimental. Red forces Shug to steal drugs so he and his friends, a bunch of useless small-time crooks, can spend their days high. Red is an overbearing and violent person and is the driving force of most of the book. This changes when Glenda, Shug’s mother, meets Jimmy Vin, who seems to offer them a way to a new life, but of course things don’t go as planned.

By the end of the book, Shug has grown up, though not by his own choice and possibly not in the way his mother wanted. Woodrell really is an amazing writer, as the following description of Glenda clearly shows:

“[Glenda] could make ‘Hello there’ sound so sinful you’d run off and wash your ears after hearing it, then probably come back to hear it again.”

This is another feather in Mr. Woodrell’s hat, a book that is absolutely among the best I’ve read all year, and one that I recommend without hesitation. Four-and-a-half stars.