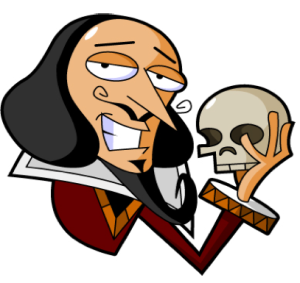 One morning I woke up with the following colorful phrase floating around in my mind:

“May your genitals sprout wings and fly away.”

It’s from a Terry Pratchett book, but I can’t seem to remember which one. *edit* (I have now been told that this quote is from Small Gods.)

This prompted me to seek out a few more insults, and since writers are so clever and good with words they should be a good source of colorful language.

And so I give you:

10 Insults from authors and books:

1. “A pox o’ your throat, you bawling, blasphemous, incharitable dog!”
― Shakespeare, The Tempest

2. “I did not attend his funeral, but I sent a nice letter saying I approved of it.”
― Mark Twain

3. “Some cause happiness wherever they go; others whenever they go.”
― Oscar Wilde

4. “He has no enemies, but is intensely disliked by his friends.”
― Oscar Wilde

5. “A knave; a rascal; an eater of broken meats; a base, proud, shallow, beggarly, three-suited, hundred-pound, filthy, worsted-stocking knave; a lily-liver’d, action-taking, whoreson, glass-gazing, superserviceable, finical rogue; one-trunk-inheriting slave; one that wouldst be a bawd in way of good service, and art nothing but the composition of a knave, beggar, coward, pander, and the son and heir of a mongrel bitch; one whom I will beat into clamorous whining, if thou deny the least syllable of thy addition.”
― Shakespeare, King Lear

6. “She looked as if she had been poured into her clothes and had forgotten to say ‘when.'”
― P.G. Wodehouse

7. “The dress looked like it had been sown in a rage and put on in a tempest”
― Oscar Wilde, from The Picture of Dorian Gray

8. “There are books of which the backs and covers are by far the best parts.”
― Charles Dickens, Oliver Twist

10. “An unmanly sort of man whose love-life seems to have been largely confined to crying in laps and playing mouse.”
― W. H. Auden, about Edgar Allan Poe